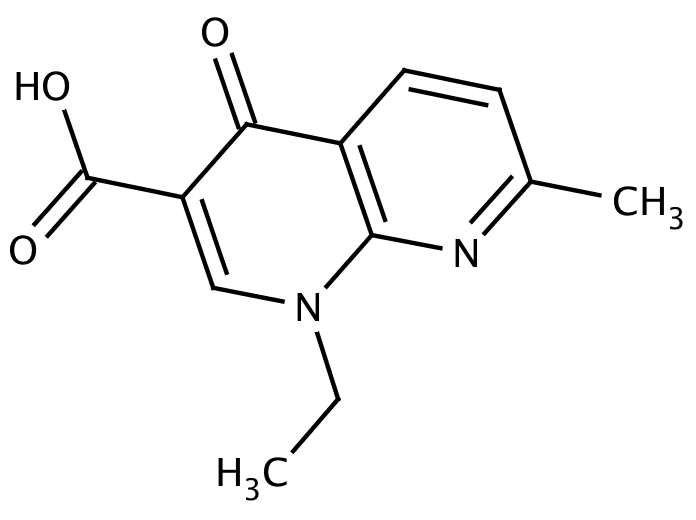 Nalidixic acid (tradenames Nevigramon, Neggram, Wintomylon and WIN 18,320) is the first of the synthetic quinolone antibiotics. In a technical sense, it is a naphthyridone, not a quinolone: its ring structure is a 1,8-naphthyridine nucleus that contains two nitrogen atoms, unlike quinoline, which has a single nitrogen atom. it is used to modulate (inhibit) bacterial DNA gyrase-dependent processes such as DNA polymerization, (ATP-dependen)t DNA supercoiling, and chromosome fragmentation.

Also used in Columbia Blood Agar .It was first described in 1966 by Ellner, Stoessel, Drakeford, and Vasi who incorporated animal derived peptone, enzymatic digests of casein, and defibrinated sheep blood into one medium.  It was found to be an improved form of Blood Agar, promoting both luxuriant and rapid growth, improved pigment production, typical colony morphology, and sharply defined hemolytic reactions. Ellner, et al., also described the use of nalidixic acid and colistin in Columbia Blood Agar.  Columbia CNA Agar was designed to suppress the growth of most gram-negative bacteria, including Klebsiella , Proteus , and Pseudomonas species from mixed flora specimens, thus isolating for gram-positive staphylococci and streptococci. Columbia CNA Agar with Esculin contains esculin (full strength) to differentiate group D streptococci from Streptococcus agalactiae, as S. agalactiae is not capable of esculin-hydrolysis. When esculin is hydrolyzed by organisms it forms dextrose and esculetin, which react with a compound in the media to produce a darkening or blackness around the colonies.

Send us your enquiry for Nalidixic Acid. We offer custom pack sizes at special prices. We aim to respond to your enquiry within 24 hours.

We value your input so if you have suggestions regarding new applications for Nalidixic Acid email us and we will include your contribution on the website.